Cutting through the rain and darkness, I write this week’s entry aboard a train home to New York City from Philadelphia.  In Philly this weekend I was lucky to view and be inspired by the “Van Gogh Up Close” exhibit at the Philadelphia Museum of Art.

Prior to this weekend, I knew very little about Vincent Van Gogh.  My knowledge was pretty much limited to Starry Night and that self-portrait of him with a cut-off ear. Saturday afternoon, I was happy to learn more about Van Gogh’s interesting life.  Here are some tid-bits for background:

4)   In 1889, one year before his death Van Gogh committed himself to an asylum, where he painted many of his most famous works

Beyond these facts – the exhibit promoted a narrative on Van Gogh’s tortured psyche.  Throughout his life he suffered from mental problems, which manifested themselves interestingly in his paintings.  The one theme I enjoyed most was Van Gogh’s treatment of the horizon line.  Toward the beginning of his career Van Gogh painted pictures where the horizon was about half way down the canvas – the composition consisting of half sky and half land.  As he plunged into the depth of mental illness, the horizon line in his paintings crept higher and higher, as if the artist’s view paned downward as he hunched over with depression.  Around 1887, the paintings of many garden scenes saw the horizon disappear altogether – the subject of the painting focused squarely on the ground with no sky in sight.

Aside from the symbolic rising horizon line, Van Gogh’s paintings remarkably showed few signs of his mental illness.  In fact – Van Gogh frequently depicted visibly upbeat and happy scenes.  Hay bails set out in a field that appear to waltz like ballroom dancers, still life paintings that stir with bursts life, beautiful orderly gardens and landscapes depicted with dreamy swirls of paint.  Upset and tortured in the physical world, it was as if Van Gogh tried to paint himself a dream-world where he could live happily and escape his troubles.

Shortly before he died, Van Gogh painted an unusual scene.  Tree branches and blossoms on a light blue sky.  The perspective puts the viewer lying on the grass – staring up into the sky on a clear spring day.  Van Gogh painted the picture for his Brother Theo, on the occasion of the birth of Theo’s first son – named Vincent in his honor.

Looking at the painting you have to wonder – did Van Gogh know his death was near?  Had he resigned his battle with the world and painted himself an escape?  Perhaps we’ll never know for sure. 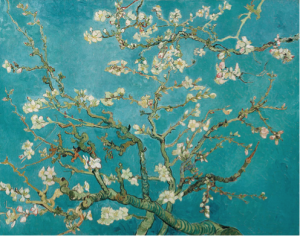