For the past two weeks I’ve been reading Daniel Kahneman’s Thinking Fast and Slow.  I’ve really found it fascinating.  The main premise of the book is that our brains have two gears: a fast gear for intuition and snap judgments, and a slow gear for really thinking things through in a logical way.  Kahneman calls these two gears “System One” and “System Two” to represent fast and slow thinking, respectively.

To get you in the right mindset for this blog post – let me show you few examples of the two systems in action.

Look at the picture of the woman below: 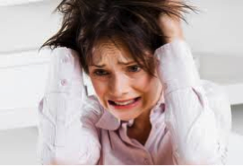 It’s clear that the poor stock-photo woman above is very stressed out, but how did you know?  You didn’t have to sit there and analyze the features of the woman (ok – furrowed brow, messed up hair, hands on the head – yup, she must be stressed) – you just instantly recognized her emotion by looking at her face.  This fast thinking is a feature of System One, which helps us recognize the faces of our friends when we see them on the street, and makes us confused when we hear a male voice say, “I’m pregnant.”

Now for something a bit different.

System One is unconscious and instantaneous.  System Two is thoughtful and logical.

Now let’s think about the presidential election.  The magic of our democracy is that each individual American gets to evaluate which candidate they think would make the best president.  The process of voting ensures that we elect the correct candidate by aggregating the evaluations of every citizen in our country (our founding fathers were obviously big fans of James Surowiecki).

When it comes to deciding who should be president, it makes sense for each individual to use System Two.  Evaluating policy and leadership should be a logical endeavor.  The best result comes from collecting all the facts, considering each choice thoughtfully and making an informed decision about which candidate’s positions most closely align with your own.  This thoughtful analysis is exactly what the debate moderators have been trying to promote.  So why does it seem like the candidates have been doing everything they can to dodge their logical questions?

The core problem here is that it takes a lot of work to convince System Two to do something.  You have to provide facts, support your arguments, explain your assumptions, etc.  System One, on the other hand, is a comparatively easy target.

Rather than explain complicated economic policy to an audience of 300 million people so they can collect the facts and analyze their decision, it’s much easier to ask them a question they can answer using System One: “Are you better off now than you were four years ago?”

Rather than try to explain the intricacies of foreign policy and social issues it’s much easier to appeal to System One by saying, “You don’t want more policies like we had during the Bush era.”

Instead of encouraging us to consider the issues and thoughtfully cast our vote, both parties are asking us to choose a candidate using the same method of thinking that tells us that British accents are classy and that strangers are scary.  They’re encouraging us to make snap judgments about the candidates, the same kind of snap judgments that drive prejudice, stereotypes and racism.

Both political parties have realized that the secret to getting the most votes is by appealing to System One and encouraging people to make snap judgments.  From what I can see, it’s working.  The only side effect is that they’ve created a severely divided country incapable of objectively evaluating policies and issues.