Last Thursday, Build-A-Bear workshop announced that they would allow customers to “pay their age” for their products.  For those not familiar, Build-A-Bear workshop sells customizable teddy bears and other stuffed animals for – after customizations – roughly $50-$60, so it’s no wonder that the “pay your age” event garnered a lot of interest.  Around the country parents of young children salivated over the opportunity to get their youngsters a new stuffed pal at a steeply discounted price.

At this point, we all know it was a disaster.  So many people showed up for the event, they had to shut it down only a few hours in.

Hindsight being 20/20, we now know that this was a terrible idea for a variety of obvious reasons:

But those issues aside, here’s what I found so compelling about this business gaffe:

The promotion was billed as “pay your age” – which successfully lodged in the minds of their customers that they would be able to get a fully customized furry companion for their three-year-old child for just $3.

However, that wasn’t actually the deal. 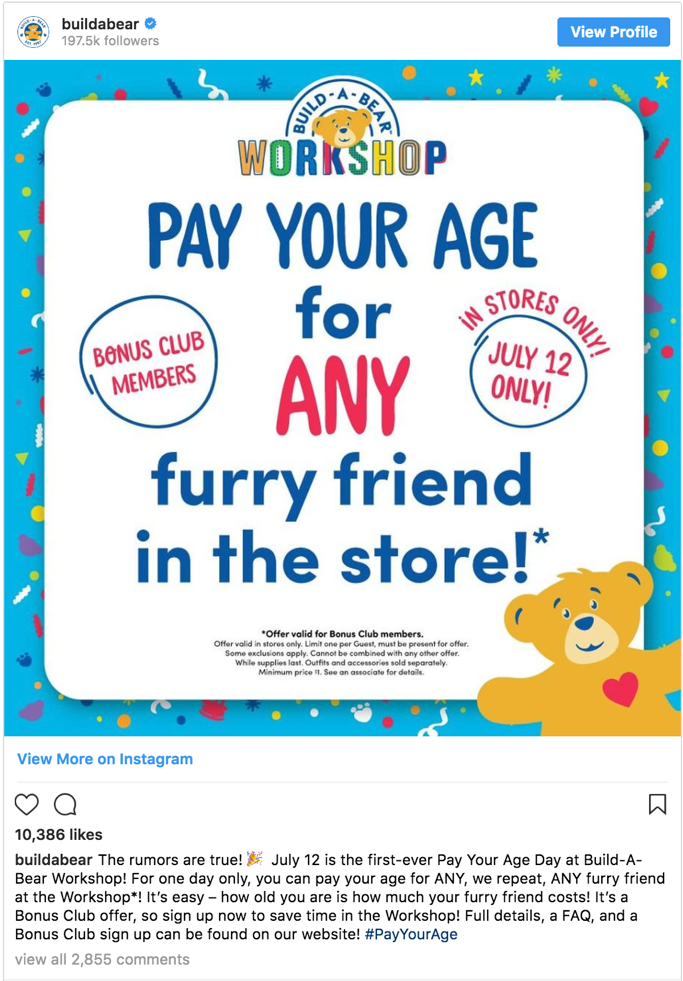 At the end of the ad there is a pretty big caveat hiding in the fine print: the “outfits and accessories are sold separately”.  Well, as someone who has been to a Build-A-Bear workshop, I can tell you that the outfits and accessories are about three quarters of the total cost.  If I remember correctly, the “base animals” cost around $15 while the customizations add up very quickly and represent the balance of the $50-$60 that you end up paying at the register.

There’s a giant difference between a 94% discount and a 24% discount and that’s why, I believe, they had so many folks show up.  If they had billed this as a “24% off” sale, I don’t think they would have had a problem.

After the failed promotion, Build-A-Bear announced they would issue $15 vouchers for families who came to the event and were turned away.  I would not be surprised if there is backlash from their customers over the apology vouchers.  Based on my math above, $15 off is actually a better deal than the “pay your age” deal, but I bet that some customers will still be expecting the 94% discount they thought they were going to get on Thursday.

An important lesson: when it comes to price, perception is often more powerful than reality.