In 1943, Abraham Maslow introduced the “Hierarchy of Needs” as a theoretical model of human motivations, leaving a permanent mark on the curriculum of Psychology 101 classes everywhere. The main tenet of Maslow’s model is that human pursuits follow a linear path from the most basic needs (food, water, safety) – to the highest form of enlightenment (self actualization). 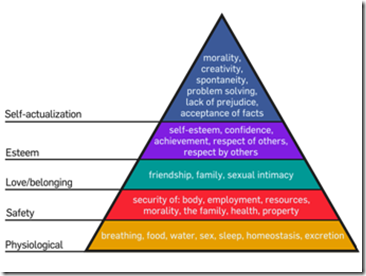 Although Maslow’s model was both theoretically compelling and easy to draw (see diagram above), it was ultimately criticized and all but disproved by a handful of later psychologists including Manfred Max-Neef and Geert Hofstede. The main criticism of the hierarchy of needs was not the “need categories” themselves – but the premise that they exist in hierarchy. Research showed that even very poor people who lacked safety and security (level 2 on the hierarchy) sought the respect of others (level 4) and even those who had little food and water and property (levels 1 and 2) sought self-actualization (level 5) – Mahatma Ghandi and Mother Theresa are always compelling examples that come up here. Today, most psychologists believe that human needs are indeed non-hierarchical and non-linear with people pursuing multiple levels of the hierarchy at once and in every which order.

Now let’s talk about marketing and sales models. Below are two pictures of frequently cited theoretical models to explain human response to advertising and marketing. On the left is the traditional “Purchase Funnel” – used in business presentations for over 100 years (originally invented in 1898 by St Elmo Lewis). On the right is a much more recent model, the “Consumer Decision Journey” created by McKinsey consultants in June 2009. 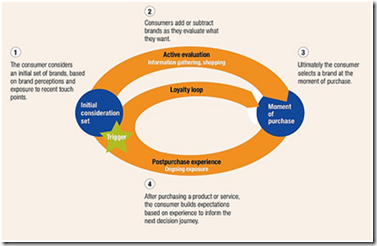 The purchase funnel (top) demonstrates the basic concept that a large number people need to be Aware of your product for just a few of them to Purchase it (people drop off as they travel down through the levels of the funnel). The Consumer Decision Journey (bottom) is much like a funnel that has been turned on its side and a tube added that connects the end of the funnel back into the middle like a siphon. The tube is called the “loyalty loop” and it recognizes that a marketer’s job is not done after purchase, but rather the customer/marketer relationship must continue to drive loyalty, repurchase and advocacy.

Like Maslow’s hierarchy, both of these models are theoretically compelling and easy to draw – however I would argue also like Maslow’s pyramid, they both fail as real life representations for the way people behave.

It is likely that people have traveled through every step of the purchase funnel in the correct order, moving from Awareness to Purchase in one linear path, however this most certainly has not been the experience for everyone that has ever purchased a product. As we learned from Maslow – human nature is inherently non-hierarchical and non-linear. People go from Awareness, to Purchase, then back to Consideration, then to Loyalty – and skip around in every which way. People can also experience multiple levels of the funnel/journey at once – learning about a product and at the same time becoming loyal to that brand (before they even purchase!).

Although I do believe that these models serve a very useful purpose in advertising and marketing – we must remember their limitations in representing real human behavior.

In the famous words of George E. P. Box – “All models are wrong, but some are useful.”