A few weeks back, Miranda and I went to visit the Edward Hopper show at the Whitney Museum of American Art.  First off, the exhibit is amazing and it was great to see Hopper’s work in person.  As compared to prints or images of Hopper’s work, the original paintings glow with an almost magical luminescence.  Just standing before some of his iconic paintings was really quite a rush.  But more than that, the exhibit showcased a truly disciplined and dedicated man.  The passion he had for his craft was really quite intoxicating.

The exhibit was broken up into several sections.  Each section showcased one of Hopper’s masterpieces along side dozens of “studies” – sketches that Hopper made to practice drawing portions of the final composition.  One room, containing Hopper’s New York Movie, displayed the painting juxtaposed with all 52 of the sketches that Hopper made to prepare for the final painting.

The final work, shown below, is the result of months or even years of sketching.  In the end, the theatre shown in Hopper’s work has been traced back to seven different theatres in the New York area.  Hopper no doubt visited all seven and while movies played in the background, he prepared for his masterpiece. 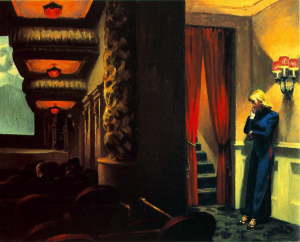 The thing that really impresses me about Hopper is that from a young age, it was clear that he was a naturally gifted artist.  One portion of the exhibit that focuses on Hopper’s school years shows some of his very early self-portraits and life drawing.  It’s clear even in his early work that he was very technically talented when it came to portraying figure on paper.  But what’s more amazing than that is that he was also the most practiced.  In one life drawing class in college he completed more than 600 drawings in one semester – far more than were expected by the course curriculum.

He showed the same discipline in every part of his life.  You may notice that all of the women in Hopper’s paintings look very similar.  The reason for this is because after he was married (to Josephine Nivison) he used her exclusively as his model as to insure she wouldn’t be jealous of him looking at other women.

I spent hours walking around the exhibit just absorbing Hopper’s aura of discipline and dedication.  As the docents swept through the gallery to close the museum at the end of the day I was still sitting there looking at final painting in the gallery: a simple painting of light on a wall.  Walking out of the museum I had a lot of thoughts, but my main take away was this:

The closest thing to a failsafe way to be the best at something is just to be more passionate about it than anyone else.