I spent the majority of the day today preparing for a lecture that I’m giving up at Skidmore College next Friday on the subject of Advertising and Market Research. To share some thoughts (and collect some preliminary feedback) a few ideas from the presentation are shared below: 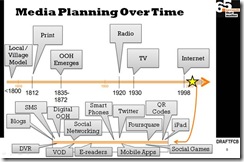 The development of media over time is illustrated above in broad strokes. As is clearly visible, the media landscape has been somewhat stagnant for the majority of history. Leading up to the 21st century there were really only a few media choices available to advertisers (namely, Print, TV, Radio and OOH) – however around the year 2000 there was a flurry of development in the digital media space. This period of development and media innovation led to a key shift in consumer mindset (indicated above by the yellow star) that has been overlooked by many advertisers.

Up until the year ~2000 consumers had to seek media – they would go buy Newspapers or Magazines for News and Entertainment. TV and Radio did come into their house – but they would have to schedule time to watch it. Before the year 2000, the onus was on consumers to find media

However, after the year2000 there was a shift. People didn’t have to go find media anymore – digital technology allowed for media to come to them, on their schedule. After the shift, DVR and VOD allowed consumers to watch TV whenever they chose – Pandora Radio and iTunes allowed consumers to listen only to the music they liked and control when it started and stopped. Entertainment that was previously only available through Print media (i.e media you had to go out and find) was now available though every digital outlet and mobile device.

A result of this shift in consumer mindset is the introduction of a new variable into the advertising equation: Consumer Indifference. Spurred by the fragmenting media landscape and fueled by the oversaturation of advertising messages in the marketplace – consumers have become dismissive and indifferent toward advertising messages.

The irony here is that new media advancements – the very technologies that are allowing advertisers to interact with consumers in ways that have never been possible before –may be causing consumers to be increasingly indifferent toward advertising.