One week ago I had never experienced an Earthquake or a Hurricane – now I’ve experienced both.

Overall I must say it hasn’t been too bad, although there were a few very scary moments on Tuesday (as you can imagine, when your NYC office building starts shaking an earthquake is not the first thing that comes to mind). Having survived the week’s natural disasters, I suppose it’s as good a time as any for a little reflection on Steve Jobs.

Before the news of his retirement was bumped clean out of the 24-hour news cycle, I spent some time reading about his career and watching a few videos of his past speaking engagements. One video in particular that caught my attention was a commencement speech Jobs gave at Stanford some time ago (just after being diagnosed with Pancreatic cancer). In the speech, Steve talks about what has driven him to succeed in his career. Here, many well-known businessmen may say something religious, or family-oriented – but Steve Jobs stated that the biggest motivator in his career has been death. It’s not that he’s scared of death – it really has nothing to do with fear, but rather motivation. The biggest motivator for Steve Jobs is the fact that someday he will die.

This motivator is not unique to Steve Jobs. Any art historian will tell you that Renaissance artwork is lousy with Vanitas images (paintings that remind the viewer of their mortality). The image copied below has several subtle death images such as the broken string on the lute and the crucifix in the upper left peaking around the green curtain. Oh yeah – there’s also the enormous skull streaked across the bottom (best seen from a side-ways skewed perspective).

What Steve Jobs knows – and what Renaissance painters knew – is that no one has unlimited time in this world. Life is short – so if you plan to change the world you better not waste any time. 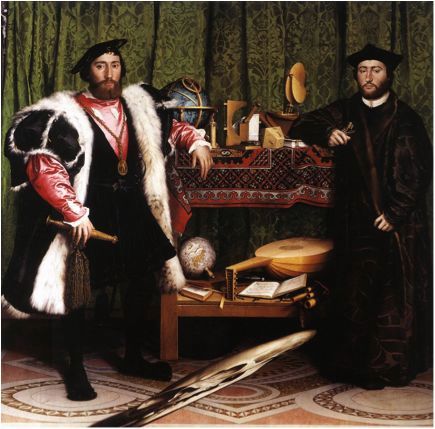