It started out as the motto of my high school lacrosse team.  I still remember the first time I saw the phase written down.  I was sitting in the school cafeteria while my coach handed out t-shirts with the words printed on the back.

It really bares little resemblance to most other sports mottos – it’s much longer and more complex.  It’s almost philosophical.  The second I saw it I knew that it described something that I deeply believed in.

As the years wore on, it became less of a motto and more of a way of life.  Nearly every success I experienced in sports and later in the working world came at the credit of thorough preparation and hard work.

Over the years I kept these words close to me.  I often found myself wearing that very same t-shirt from high school under my clothes during important events in my life – big exams at school, playoff games, important meetings – I even wore that same t-shirt underneath my dress shirt when I interviewed for my job at AppNexus.

Later, I had the phrase embroidered on the inside of my suit jacket. 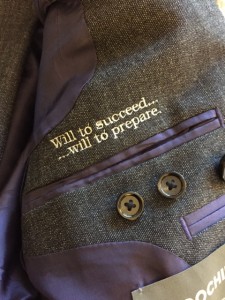 However, lately I’ve come up against a bit of a problem:

What happens to someone who has made a career on relentless preparation when that person runs completely out of discretionary time?

For years, I’ve prided myself on being more prepared than everyone else and as a result I spent a lot of time prepping for every meeting.  Thinking over every email.  Prepping for every interaction.

This preparation has earned me some success, and with success comes more responsibility, authority, direct reports and people who count on you.  Every increase in responsibility has meant more time spent in preparation.  One by one, I slowly cut out every discretionary activity out of my life to make room for more work.

First there was the easy stuff.  Coming into work early and leaving late.  This is normal practice in New York and felt quite natural and manageable.  Then there were mealtimes – breakfast and lunch getting squeezed into 5-minute blocks or bundled into meetings.

It got harder from there.

I started to cut out some of my reading – before bed and on the subway in favor of returning emails.

Then I started working most Sunday’s. Just for a few hours.

Sometimes I would get back on my computer and work after my wife had gone to bed.  And I’ve even started to shortchange my blog time on Sundays.  And then I got sick.

The will to prepare means nothing without the will to succeed – certainly. However, life requires real trade offs.  And personal time is not purely discretionary.

What I learned is that the secret is not sacrificing more free time, but rather it’s making genuine trade offs during the day and passing more work to others.  Delegation, empowerment and prioritization are now the most important skills to build.

Perhaps I should consider changing my motto.

The will to succeed means nothing without the will to spend time investing in others.

The Will to Succeed Means Nothing Without the Will to Prepare
Tagged on: Delegation    Hard Work    Time Management