After being repelled by long lines and enormous crowds on two prior visits, this weekend I finally got to see the Vasily Kandinsky retrospective on display at the Guggenheim museum (it will be up through January 13th). The exhibit, which was one of the best I’ve ever seen, is experienced chronologically starting at the base of the Guggenheim and ascending up the main gallery as the paintings progress through time. I won’t go too far into the content – but it’s incredible to see how his work starts off as representative abstraction (almost cubist) and then progresses, as you walk higher up the Guggenheim spiral, further into abstraction and climaxing in free expressionism – totally liberated from reality.

At the time (the early-mid 1900s), when art had more formal structures, Kandinsky’s work was seen as radical. However, now we know that he was on the cutting edge of an artistic revolution.

Kandinsky’s story is the type that society holds most dear – it’s essentially an underdog story. There are many examples of these stories (take a look at the movies!). A person succeeds despite going against convention. A person challenges and defeats societal norms. A person finds victory despite all odds.

Typically, as we look back on these stories we credit the underdog protagonist with super human attributes – uncommon vision, relentless drive, unyielding passion – but is this really the case? It’s no doubt that Kandinsky was a very talented artist and creative thinker, but were his artistic gifts really that superior to his contemporaries?

Although it somewhat contradicts American ideals – you have to figure that the greatest ingredient into the cauldron of success is not vision drive or passion – but luck.

I mean, you have to wonder – how many other people were there in the early 1900’s painting circles? 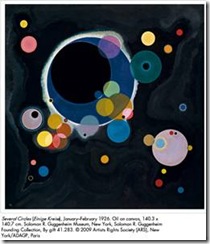