I’ve recently started reading Whistling Vivaldi by Claude M. Steele, a book about how stereotypes impact our identities and our lives.

The story is told from the perspective of Steele, a university professor and social psychologist studying (among other things) the underperformance of minority students at the university level.  At the core of his research are a series of studies on what he calls “stereotype threat” – that is – how the risk of confirming a stereotype affects our performance.

His findings can be roughly summarized as follows:

If you’re being given a test and:

You will probably perform below the level of your true ability.

Said differently – the threat of confirming a pre-existing stereotype by performing poorly will be sufficiently distracting to lower your performance on the test.

This was seen in his tests in a number of areas including:

I find these studies extremely interesting, especially because they somewhat confirm my hypotheses here: http://www.andreweifler.com/why-is-d-n-i-important/.  It’s also very disturbing to think that stereotype-threat-induced-underperformance is probably most often viewed as stereotype confirming behavior – which is truly a tragedy.

I was thinking more about Steele’s work last week and how to describe stereotype threat in an accessible way.  Here’s what I came up with:

Imagine I asked you to walk in a perfectly straight line down a hallway. Assuming you were sober and in normal condition, chances are you could accomplish this task easily and without thinking too much about it. There is very little risk of you falling over and you can probably complete the task at least 10 times in a row without making a wrong step.

Now imagine you’re walking in the same exact manor, but instead of on the ground, you’re walking on a six-inch wide beam that is suspended six feet in the air.  Now try to walk that same straight line.

Both scenarios involved completing the exact same task, but with different context, the second one is much harder.  The reason is because the repercussions of failing at task #2 are greater. You might fall.

Now – falling 6 feet probably isn’t going to hurt you, and neither will confirming a stereotype about your race or gender, but both are just distracting enough to materially and reliably alter your performance.

That’s what the authors found.

A very important lesson to keep in mind when interviewing, testing, or otherwise evaluating people who may be subject to this effect. 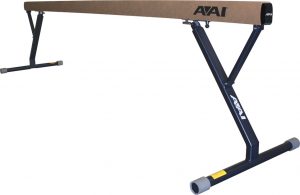